with the route marked

We have a new venue this year.  The Denholme Mechanics Institute in the centre of the village.  This involves a slight change to the route description.

For those who have walked it before we have made some changes to the Harden Hard'un route.   We start at Denholme and join the old route at Doe Park Reservoir.   The route continues along the Pennine Way over Top Withins to the Bronte Falls rather than the tricky section over Oxenhope Stoop Hill.   We have also made some changes around Harden taking the footpath round the village and coming back via Hewenden Viaduct to the church. 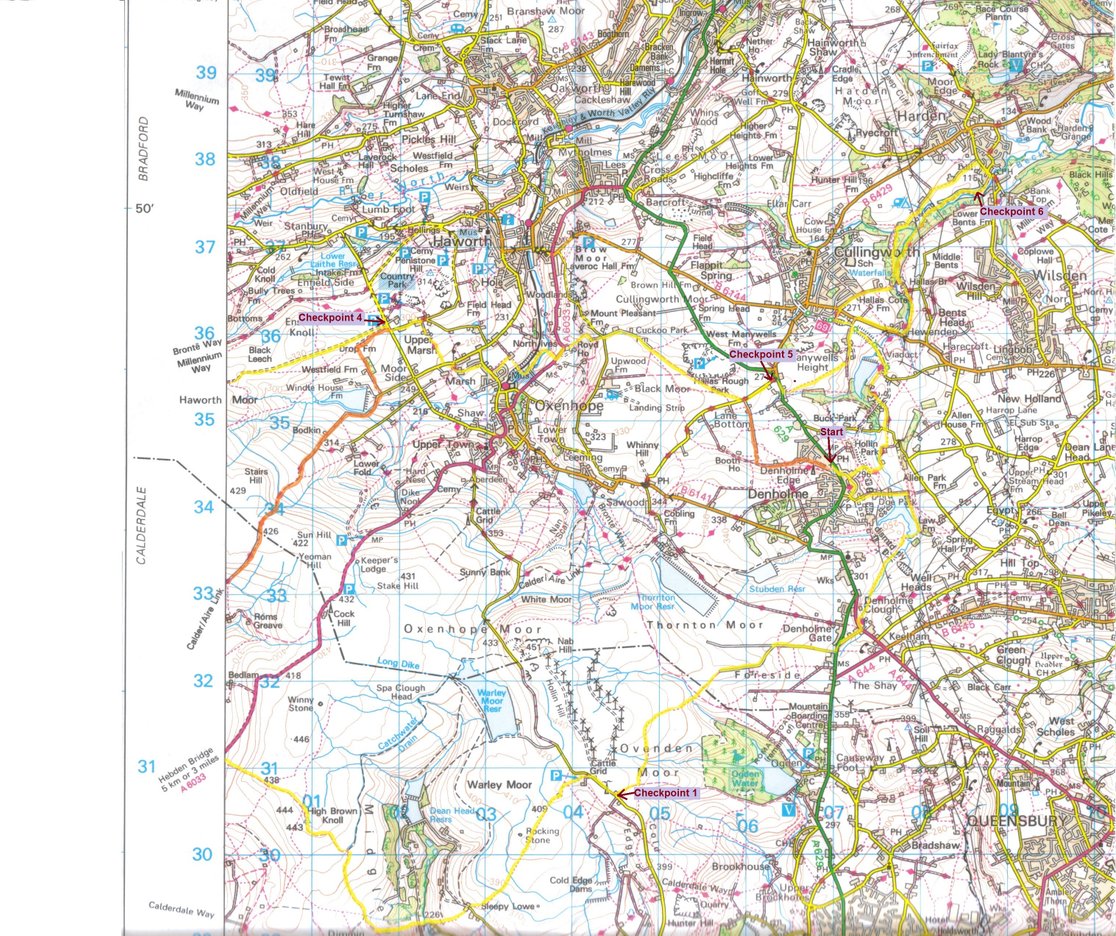 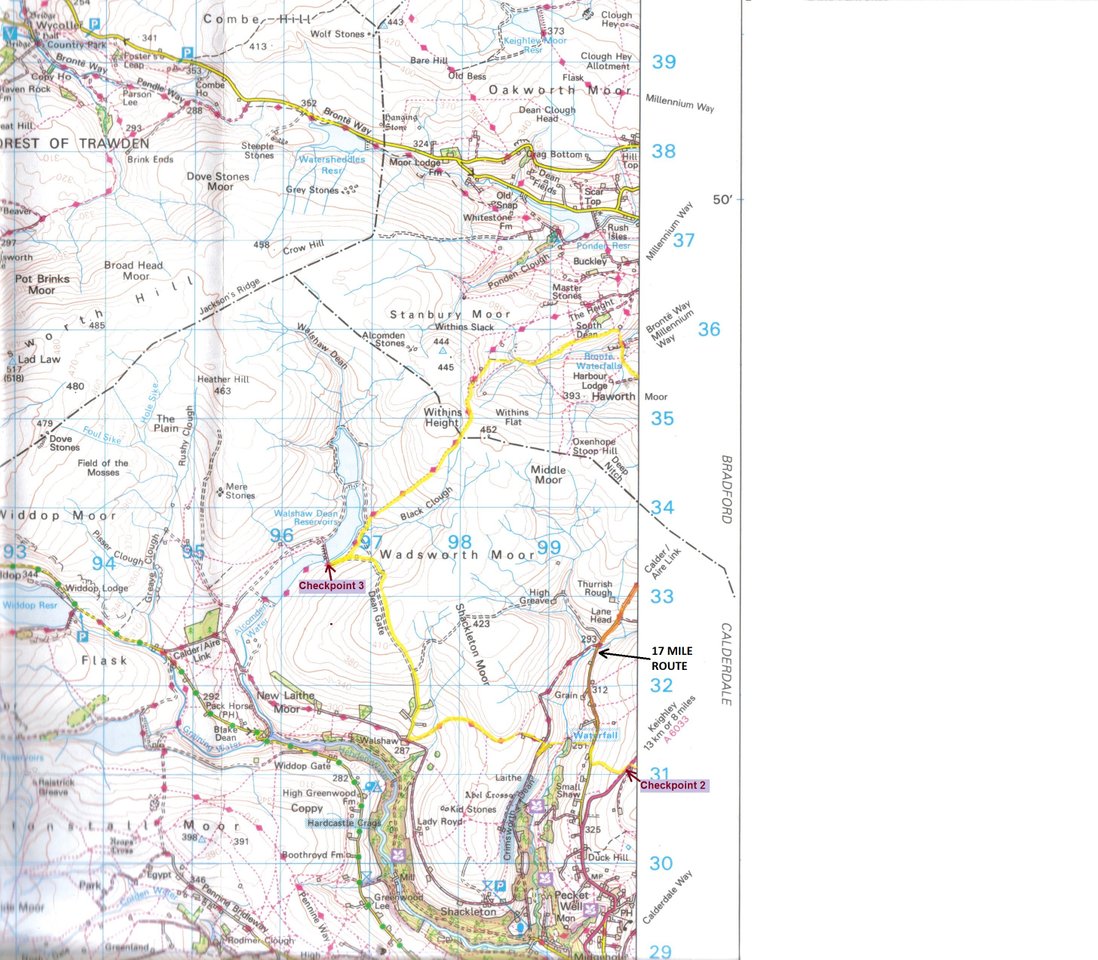 Turn Right from the Mechanics Institute.  Do not take the main road but the small road past the coop leading to the path with the park on your right.  At the end turn right down hill and across the reservoir embankment.  Take the path R (follow footpath to the left of track) to the far end of the reservoir. Cross the footbridge and turn immediately L up the valley. The path follows, initially on the R and later on the L, Denholme Beck, and after passing some cottages joins the A644 at GR 073326.  L and then R up Cragg Lane to A629. Cross with care and L for 60 yds then R up Foreside Lane (Waymarked). After a group of 3 trees ignore the track to the right and bear left. Continue along track until meeting a track running parallel to the river valley.  Cross track and descend down to bridge.  Cross and climb stairs on the other side.  Cross stile and follow well defined path across Ovenden Moor. After crossing FB you soon reach track. R up track to CP1 at Withens Inn (GR 045307).

From CP, turn right up lane taking first footpath sign on L after some gates . After passing building bear R and head for the distant Stoodley Pike (if visible). If it is not, the bearing is 230°. Some posts and cairns mark the path. As it drops it bears R to the gatehouse. Cross stile, L on lane for 20yds and then R down footpath by house. Path bears slightly R to a stile 20yds to R of gate. Cross stile and head for telegraph pole. Follow way marker to R. through gap in wall and zig zag down to lane. Bear R on road over bridge, pass gatehouse and take FP on L.  The path climbs steeply with fence/wall on your R.  Pass through a gate to the top, turn R (fence on R) and follow into dip. Cross Back Clough and continue in same direction (350°) on the narrow bridleway. When you reach the conduit where there  is a wooden post bridleway marker turn left along the conduit.   After 80yds the conduit ends and the path turns R (330°). After 250yds you reach another bridleway marker. Continue along path to standing stone. 200yds on a 320° bearing will bring you to the Trig Point (High Brown Knoll). From Trig Point take path N for 140yds when path bears half left to a bridleway marker. Continue on, roughly 300°, passing footpath sign and keeping in the plateau until the A6033 becomes visible in the distance. Drop sharply to meet the A6033. Cross the road to CP2 (GR 999311).

Down road for 50yds, take stile on R. Down the moor, through small gate and down the side of next field to Old Road (17 mile walkers continue to next section) R for 200yds then take bridleway on L. This drops sharply along cobblestones to, and crosses, Lumb Bridge. Continue on bridleway. This walled lane climbs to a ruin and then bears L at a bridleway marker to a track (footpath sign). Turn R on track for 100yds before taking bridleway on L (signed Penine Bridleway/ Calder Aire Link) just before the next ruin. Through gate at top of walled lane to open moor. Follow the wall on your L until directed through small gate by bridleway sign and then follow wall now on your R (big field). At end follow clear track towards the hamlet at Walshaw.

At lane bear R but after 30yds take track on R at Walshaw. Ignore track on R to Horodiddle and shortly after at farmhouse bear right through gate and continue on track.  Track goes uphill (to R of wood) across a stile to a walled track.  At the top take the footpath directly ahead as the track bears left.   This shortly rejoins the track. Continue ahead on track uphill (ignore track on R), over the top of the moor and down to the shooting hut. L (signed FP to Walshaw Dean) for 300yds, follow main track as it turns sharply L (the checkpoint is at the end of the dam between the lower and middle reservoirs) and you are at CP3 (GR 970334).

Turn R down Old Road and continue for 3.5 miles.  After a steep climb and at a footpath sign saying Calder-Aire Link) the tarmac road becomes a track.  After the reservoir and after gates showing Windle House Farm and at the footpath sign turn left onto track.

Follow track, through a a gate onto footpath where the track bears right. At the top by the waymarker turn right onto a track. Follow track to CP4 and continue to STAGE 5.

Follow footpath sign (Pennine Way) continuing alongside middle Walshaw Dean Reservoir, join track and after 100 yards take signed FP (Pennine Way) on your R.   Follow the Pennine Way for about two miles and shortly after the ruin at Top Withins take the signed footpath R to the Bronte Falls.  Continue for one mile along path to another footpath sign signed Bronte Way/Haworth and turn right down to the Bridge.

Cross the Bronte Falls Bridge and at the footpath sign DO NOT TAKE THE PATH TO THE LEFT but the weaker path to the right which bears right, climbing steeply with the falls on your left.  Where the path meets a track by two metal barns turn L along the track.  Continue to the road, cross to CP4 (GR 018362).

Proceed downhill on the road and after 100yds take lane on L (Upper Marsh Lane). After passing houses on R take FP on R.   Path goes through small gate to R of Upper Marsh Farm then follows the stream (if not dry) to a road. Turn L for 200yds before taking track to R of Marsh Chapel, which is on your R. Follow the track, which bears L, through two small gates to Moorhouse Lane. Turn R down road and take signed FP on L opposite Moor House.

Follow the paved path until you reach Bents House on your R. Take the FP to R immediately beyond Bents House. Keeping the wall on your R, the path drops down to and crosses the railway (care!) and continues to Bridgehouse beck. DO NOT CROSS the beck but go L, through a Kissing gate and ahead on track. This soon becomes a path again and crosses the beck via a metal bridge. Go L but at the wall DO NOT CROSS but take the stile on R and head up to A6033. Turn L for 150yds before taking signed bridleway on R. Follow track bearing right and then left to Black Moor Road. Cross the road and continue ahead BW (signed Senior Way). Ignore two L turns after 50 and 150yds. At the end of Cuckoo Park Lane the BW goes through a gate onto open moorland, swinging R eventually to pass to the R of the quarry. 150yds after going through the broken down wall, ignore new FP on L and continue on BW to road (Trough Lane). Turn L along the road to CP5 at New Coley Nurseries (GR 064354).

Turn back up Trough Lane.   Turn left onto track at Copperas House Farm.   200 yards after a line of trees (ignore ladder over wall) turn left across a stile.  Follow path for 50 yards to another stile, cross it and turn left along a track.  Join concrete track and just after a gate take the stile on the right.  Follow footpath up slope to a gate, don't go through the gate but turn left with the wall on your right.   Follow path through another gate.  The path forks.  The path on the left goes down very steeply - ignore this.  Take the right path down to the main road.   Turn right along main road,  first left along Foster Park Road, to end, continue with park on the left to the finish.

Turn right from Garden Centre to A629. Bear R and (for safety's sake) keep on R of A629 until opposite FP sign (Senior Way). Cross the road with great care and go through the small gate. Ahead over stile and take path to L of green hut. Cross the beck via the bridge and bear R through Buck Park Wood (path high above steam). Over stile towards the end of the wood. The path meanders through some gorse bushes before crossing two walls and veering L to a gate. Pass through and continue with wall on R to East Manywells Farm. Through farm buildings and down farm lane until the crossing with the Great Northern Trail.  Turn left down trail and climb to the first bridge turning right along footpath to meet the B6144.  Cross and proceed down Hallas Lane to a sign saying 'no unauthorised vehicles'.  Immediately after take the waymarked footpath to the left.

Keep the wall on your L and follow the path round to the L. Enter the wood via the waymarked stile. Pass through wood on well defined path.

Leave the wood through a wall and down steps and continue ahead on path down the middle of the field. Cross the beck using the metal bridge and up hill, wall on R, over waymarked stile at top of field contouring R to gap in wall.

Path continues to R of the chimney, over the stile and ahead passing to R of Goit Stock Cottages, follow their drive, through a gate and take the footpath to the right marked 'Millenium Way'.  Continue along footpath to a track (ignore the track to the right) until meeting Wilsden road.  Turn right down hill to Goit Stock Lane turning right.  Continue with Harden Beck on your left to Check Point 6.  (GRID REF 087376)

Continue along lane passing to left of chalet site. Ahead on FP (signed Millenium Way and Senior Way),  continue ahead with beck now on your R. Climb the ladder by the waterfall and when you reach track at Hallas Bridge turn L. After 10yds, up steps on R and approach restored mill. Immediately before the mill take signed FP to L. At the top of the second flight of steps turn R downhill before taking waymarked FP (signed Hewenden) on your L. After the first field, the path keeps close to the wall/fence on L until, with road in view, it drops down and bears L to the B6144 above Hewenden Bridge.

Bear right along road.  Take great care over the first 100 yards before pavement.  Proceed until signpost on the left for the Great Northern Trail.  Turn left and at the trail left again, over the viaduct to the end of the trail.  Pass through gate, turn right and after 20 yards turn left with the reservoir on the right.   Through gate marked millenium way on to track and continue to Whalley Lane.  Cross and straight ahead on signed FP to track at Hollin Park. Turn R and follow track past row of cottages on your L. At the last cottage go R over bridge. Take path ahead climbing the hill keeping the wall on your right. Just before gate with millenium way footpath sign turn right with the fence on your left.  Turn left through gate and over old railway bridge and continue along path, bearing left until Foster Park Road.  Turn left and at end continue with the park on the left to the finish.